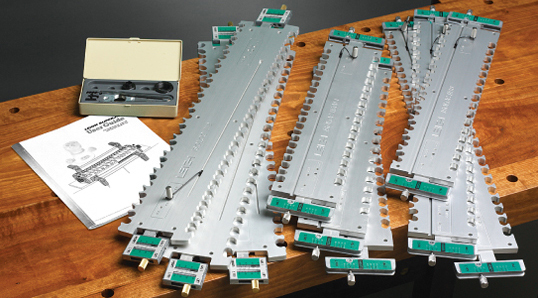 It's no accident the dovetail joint has endured through centuries of hand cut joinery as the sole design for mechanically interlocked corner joints. After all, if your saw and chisel are made to cut straight lines, how can you cut dovetails any other way? It took the introduction of hand-held routers and the ingenuity of Leigh Industries to develop a genuinely new hybrid dovetail design, the Isoloc* joint.

The revolutionary Isoloc joint represents the first entirely practical alternative to the traditional half-blind dovetail. With a Leigh Dovetail jig and an Isoloc template, even novice woodworkers can produce extraordinary joinery that is strong, functional and distinctively attractive.

By replacing the Dovetail finger assembly with one of the three Isoloc templates, you are ready to produce some very creative joinery. Each template features two joint patterns, one design carefully CNC machined on each side of the template. A single 5/16" or 8mm straight bit, preferably an upcut spiral, does all the routing.

Isoloc templates are designed primarily for half-blind joints though several of the patterns can be set up to produce through and end-on-end joints. Inlaid and Shadow Inlaid joints give an even more intriguing look to the beautiful organic shapes of Isoloc joints.

Rotating the barrel of the VGS, up or down, increases or decreases its active diameter. A 1/8 turn of the barrel adjusts joint fit by a mere one thousandth of inch!
The VGS is standard equipment with every Isoloc template. It mounts directly to many router bases. Some routers may require a Leigh template guidebush adaptor.
The name Isoloc was coined from two words: Iso from the Greek word isos, meaning equal, and loc, an abbreviation of lock.

*Patented in U.S.A., Canada and Europe